Alban, Britain's First Saint, is not well known and despite its role in British history, St Albans Cathedral does not have the high profile it merits. With help from the Lottery Heritage Fund and over 1000 donors, this significant and magnificent structure towers in the St Albans skyline. Little is known of the early churches built over Alban’s grave. The Shrine of St Alban was the reason for the Abbey’s foundation and the town that grew up around it.  It is said that King Offa of Mercia founded a monastery here in 793. After the Norman invasion of 1066, William the Conqueror appointed Paul of Caen as the first Norman Abbot of St Albans. He commissioned a new church and started the great rebuilding of the Abbey with the Tower, which still stands today. The Norman church was built from bricks and tiles saved from the ruins of Roman Verulamium. This ambitious project was completed in 1115, under the rule of Abbot Richard d’Albini. At 85 metres long, it has the longest nave of any cathedral in England. A visit to St Albans Cathedral is an awe-inspiring experience and there's lots to see.

The Shrine of St Alban

Saint Alban is known as Britain’s first saint and was buried on this site 1700 years ago. There has probably been a shrine here since then. A new shrine was built in 1308 but was destroyed when the Abbey was closed down in 1539. Pieces from this shrine were used to restore the shrine in 1872 and again in 1993. There is also a small memorial chapel underneath the main shrine chapel. This belongs to Duke Humphrey of Gloucester (d. 1447), the only royal to be buried at St Albans Cathedral.

The Longest Nave in England

At 85 metres, the Cathedral has the longest Nave in England. The word ‘Nave’ comes from ‘navis’ – the Latin name for ship since medieval people thought the ceiling looked like an upside down ship. The pillars in the Nave are decorated with stunning medieval wall paintings. The best preserved collection in any English Cathedral. A screen with carvings and statues was added to the Nave in the 1300s. The original statues were destroyed during the Dissolution. Today this screen is home to statues of seven martyrs, which represent different Christian traditions.

St Albans is the only major church in England with an 11th century great crossing tower still standing. It is also the only cathedral tower in England to be built using Roman bricks. In some places, the walls of the tower are seven feet thick and the whole structure weighs 5000 tonnes. The tower can be explored on one of our regular tower tours.

The Watching Loft was constructed in c. 1400 and is the only surviving medieval wooden watching loft in England. Monastic officials would sit in here and keep an eye on pilgrims visiting the Shrine.

The Quire was the main monastic area during the medieval period. This is where monks would have sung their services. Services still take place here every day. Why not time your visit to enjoy the beautiful voices of the Cathedral Choirs at Evensong.

The Cathedral's team of expert Cathedral Guides offer free guided tours every day, all year round, though occasionally this is not possible if an event is being held. The tours are a fun and fascinating way to find out about the history of the Cathedral, as well as seeing the hidden gems you may not have noticed otherwise. Experts on the history of St Albans Cathedral, the Guides offer up to three guided tours every day, and are also available to answer questions more informally in between. The hour-long daily guided tours also offer the opportunity to step back in time and see the nave's medieval wall paintings reconstructed using unique light projections. Guided tour times are:

OPENING TIMES MAY VARY DUE TO EVENTS 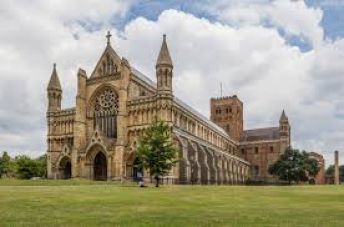