The Red Lion stands proudly as the first example of a community owned public house in the UK. The pub was bought from Whitbreads in the early 1980’s. Today, The Red Lion in Preston, Hitchin, is still successful and thriving after this innovative adventure was started. This accomplishment is something the community is very proud of. The Red Lion are supported by wonderful patrons from within the village and also have loyal and regular customers from much further afield who appreciate what a real country pub should be like. The pub thrives on its community spirit and welcomes all visitors with open arms. A beautiful traditional pub with very friendly staff.

History of The Red Lion

The origins of the Red Lion as a pub go back to about 1844, where there is documentation of beer being sold in the separate cottages that then made up what we now know as the Red Lion. The unfortunate passing of the landlord in 1980 brought the then owners, Whitbread, to a decision that they wanted to sell off the pub. An idea was floated to turn it into a large, steakhouse-style restaurant. The locals, who strongly opposed this idea, knew something needed to be done. This set the scene for a dramatic turn of events that saw the Red Lion purchased by the villagers of Preston to ensure that the pub would continue as it was and a precious and integral part of village life. The Red Lion became the first community-owned pub in Great Britain. This has been replicated many times since but what the villagers of Preston achieved in 1982 was ground breaking.

The menu at the Red Lion is of the highest quality and sources first class ingredients from many local suppliers to create a wonderfully varied and beautifully prepared dishes. The pub serves light bites from soups to salads. Main courses range from homemade Malaysian Curry to pies, fish, steak or spaghetti. The menu is always changing and is absolutely delicious. The Red Lion also boasts a wonderful selection of award winning real ales, wines and spirits.

The Red Lion has regular events that can be seen on their website. The have a darts team and a cricket team. The locals welcome visitors with a smile and this is a great country pub to visit. 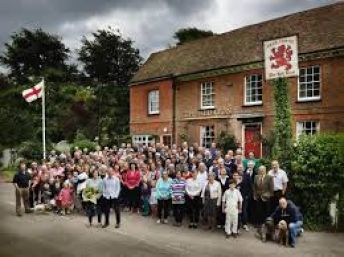