Watford Football Club was founded in 1881 and properly established as Watford Football Club in 1898. After finishing the 1914–15 season as Southern League champions under the management of Harry Kent, Watford joined the Football League in 1920. The club played at several grounds in its early history, before moving to Vicarage Road in 1922. Graham Taylor's tenure as manager at the club between 1977 and 1987 saw Watford rise from the Fourth to the First Division. The team finished second in the First Division in 1982–83, competed in the UEFA Cup in 1983–84, and reached the 1984 FA Cup Final. Watford declined between 1987 and 1997, before Taylor returned as manager, leading the team to successive promotions from the renamed Second Division to the Premier League for one season in 1999–2000.

Tickets for home & away matches can be purchased online by visiting tickets.watfordfc.com. Once a fan ID is created, tickets can be printed off at home once purchased, taking the hassle out of your Hornets' home matchday.

Buy matchday ticket at the ground

The Family Stand at The Vic is a great choice for adults accompanying someone under the age of 18. This stand has a friendly atmosphere and great perch at the Vicarage Road end of the stadium. You can buy tickets for this section via the usual means but please note, to qualify for this area, there must be at least one person 18 or under accompanying an adult ticket holder.

Watford FC support people with all disabilities. The club launched a set of Hidden Disability Cards during the 2019/20 season. The new addition is a non-mandatory card scheme, which will allow all supporters with a hidden disability to order a card containing messages relating to their particular needs, which can be given to any member of staff to enable supporters to access all of the disabled facilities. The scheme is something that a number of Premier League clubs have introduced and details will be shared with other clubs ahead of all away fixtures, so that they can also be used while following the Hornets up and down the country. 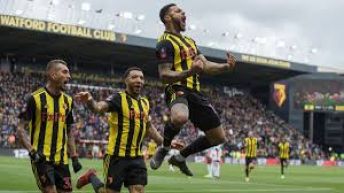